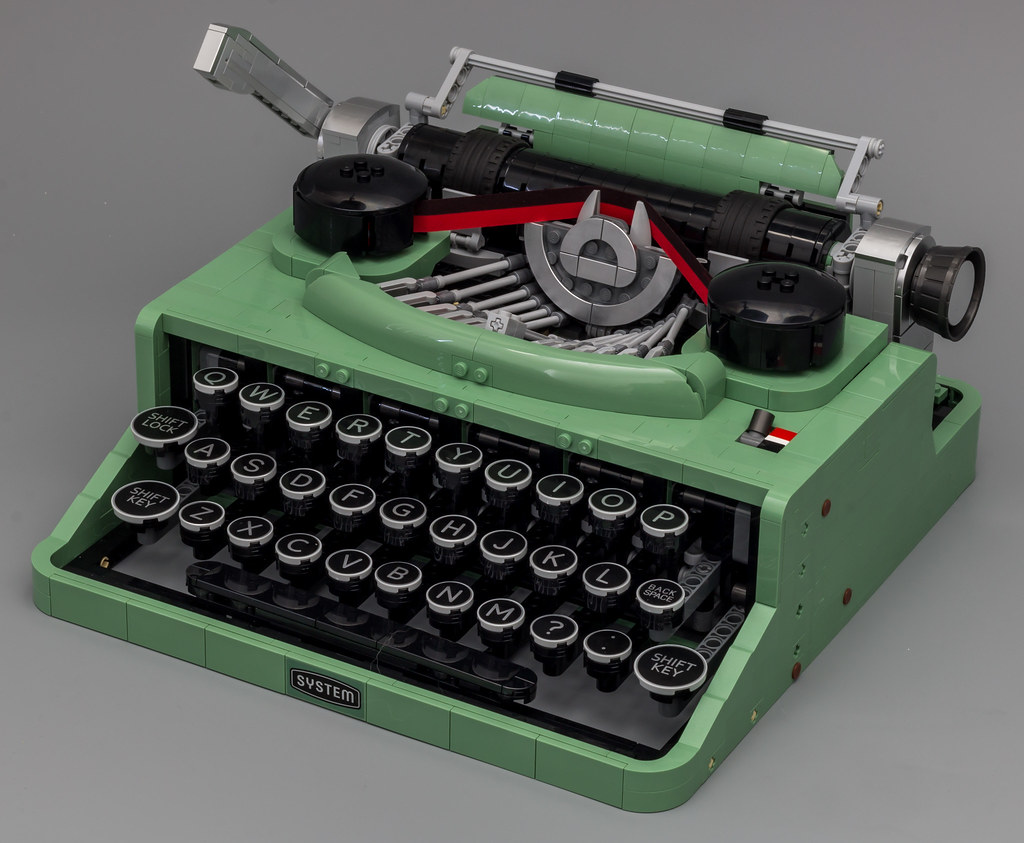 Who would have thought I'd be writing a review about a LEGO typewriter some day? Well, certainly not me. I am qualified to write this review, since I am THAT old hehe. I actually used typewriters back in the days. Admittedly, I used electronic ones, but it was a typewriter nonetheless. In all honestly, I totally missed the LEGO Ideas campaign. Maybe I did see the model at some point, but I missed the election. So, I was thrilled to get a review offer.

I absolutely adore LEGO models of real life things, such as the amazing LEGO Piano. I haven't built that one myself, but I gifted it to my parents, who absolutely adore it. My home isn't filled with built LEGO sets, as one might expect, but we always have some sets on display in the living room. At the moment, it's the Disney Castle, but that one soon will be replaced with the typewriter. When the typewriter needs to make place for a new model, I will disassemble it and give it to my parent. They will surely enjoy building it and it will be displayed next to the piano. I hope TLG will release more sets like these. One of the reason I think LEGO Ideas is one of the best (LEGO related) things that happened in the last decade. Such a variety of cool sets.

The LEGO Group has revealed the new LEGO® Ideas Typewriter set which is set to delight the most seasoned wordsmiths and fans of all things vintage. Designed by LEGO fan, Steve Guinness from Chester, UK, as part of the LEGO® Ideas platform, the LEGO Ideas Typewriter is based on a contemporary typewriter model of a bygone era, including the one used by LEGO Group founder Ole Kirk Christiansen.

When I received the review offer, all I could find was this image. Let's see how the actual product turned out to be. 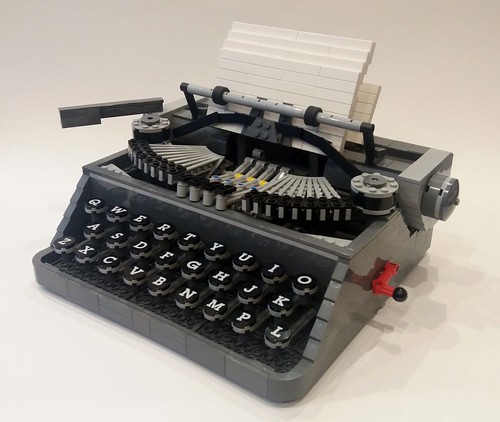 PICTURES
Pictures can be clicked to view hi-res versions. My Flickr album contains all the photos taken for this review.

DISCLAIMER
The CEE Team of TLG has provided this set. It's not my goal to promote this set. It's my goal to give you an honest opinion about it. Therefore, the opinion in this review is my own and is in no way linked to TLG.

The new 18+ dark look works really well with the typewriter. I also like the typewriter font used to display the, rather self-explanatory, name of set. In a slightly smaller font, you can see this is the 35th LEGO Ideas set. Regardless of what you think about this set, it's safe to say that LEGO Ideas is one of the coolest "themes", bringing us some very original sets.

Intricately designed to mirror the function and tactility of a classic typewriter, the LEGO Ideas Typewriter features a center typebar that rises each time a letter key is pressed, linked to the carriage which moves across as you type, as well as a platen roller that real paper can be fed into. 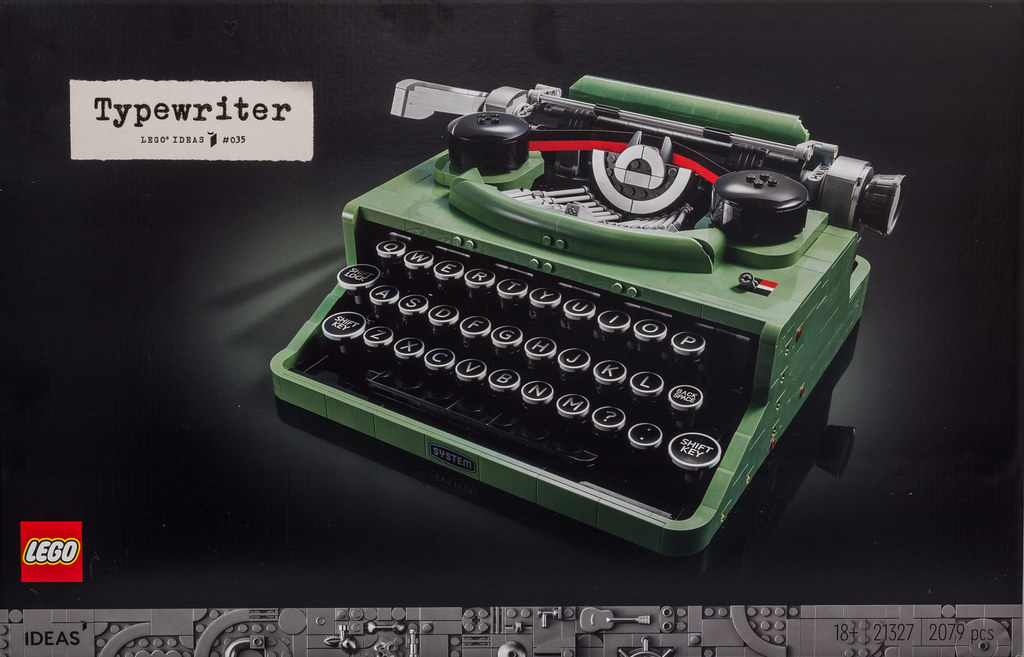 The back of the box shows the top view of the Typewriter with the dimensions (height 12cm x width 27cm x length 26cm). It also shows the special letter written by Thomas Kirk Kristiansen, chairman of the LEGO Group, translated into 43 different languages.

In a fitting nod to the lost art of letter writing, the premium quality LEGO Typewriter set also comes with a letter written and signed by Thomas Kirk Kristiansen, chairman of the LEGO Group and a fourth-generation member of the family which still privately owns the business to this day. 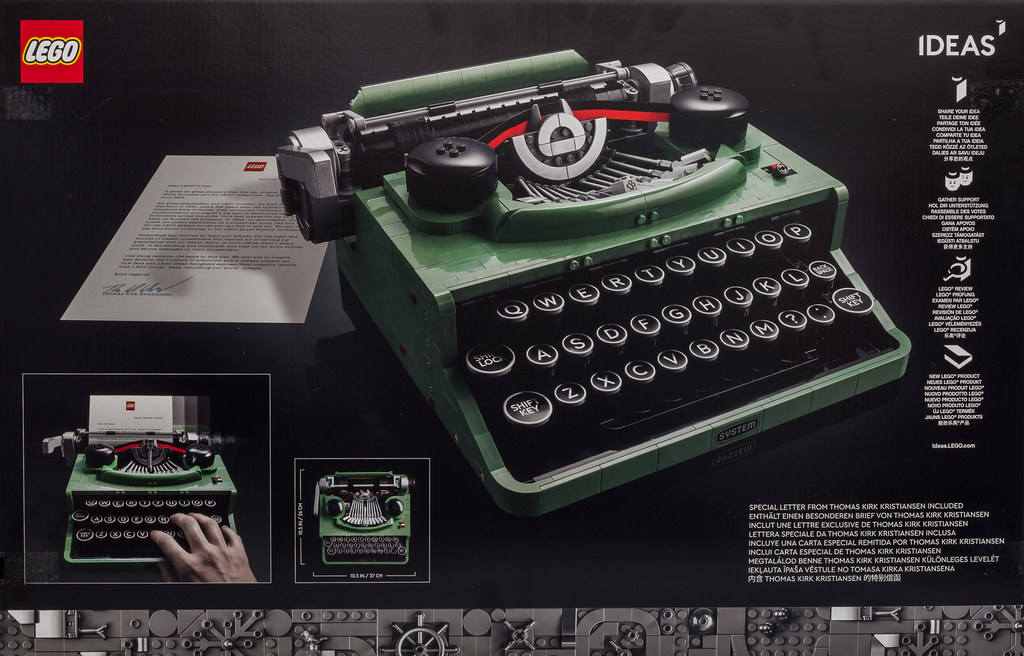 CARTBOARD ENVELOPPE
For me, this was the first time to see this way of packing the instructions, stickers and extra book with 43 letters. This is an awesome development and I sure hope that every 18+ (or more expensive) set will get the same treatment. 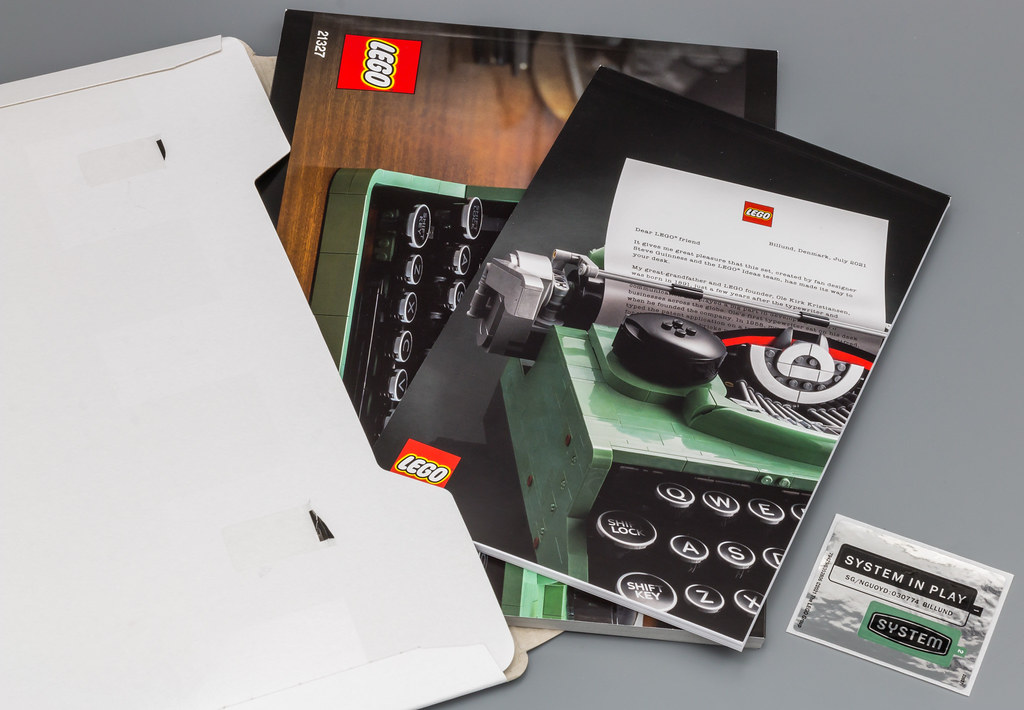 The instruction booklet, which contains some additional information about the origin concept of this set and the similar typewriter used by Ole Kirk Christiansen. 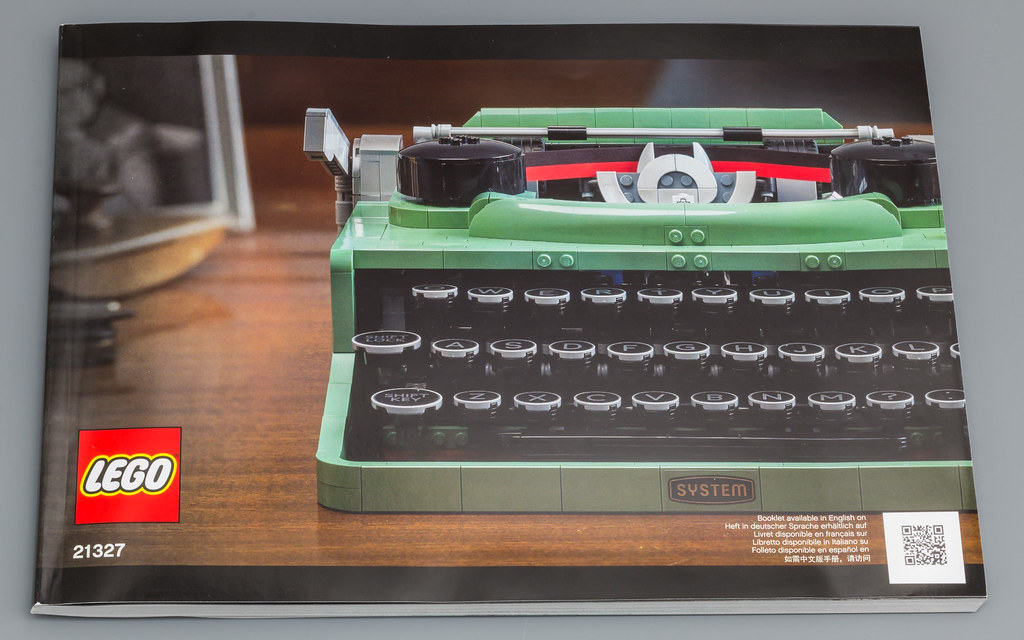 Two pages from the booklet with 43 letters. The left-hand image shows the page in English, for those of you who are in interested in the text. 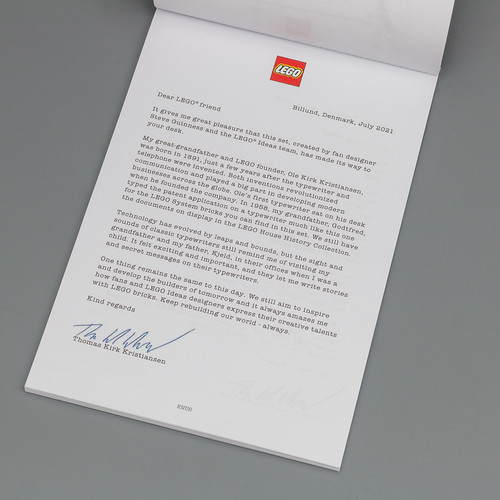 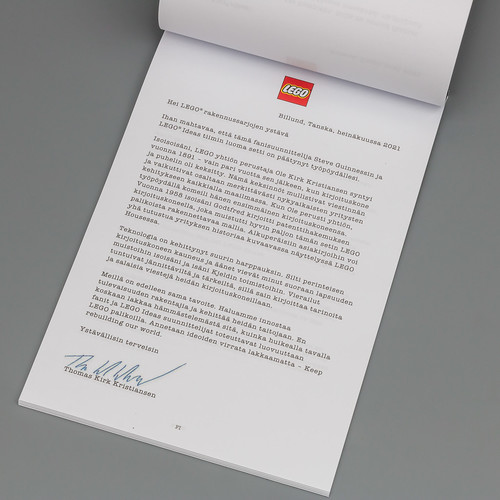 This set contains a lot of sand green, otherwise knows as Green Grocer green, parts. The entire list can be seen in the part list section. The most special, and probably least useful, parts are the five 32L axles.

The picture below shows some of the parts in interesting colors. It also show an entirely new Technic part (in red). Since I haven't built a lot of Technic lately, I might have missed this one, but asking around, I do think this is an entirely new part. 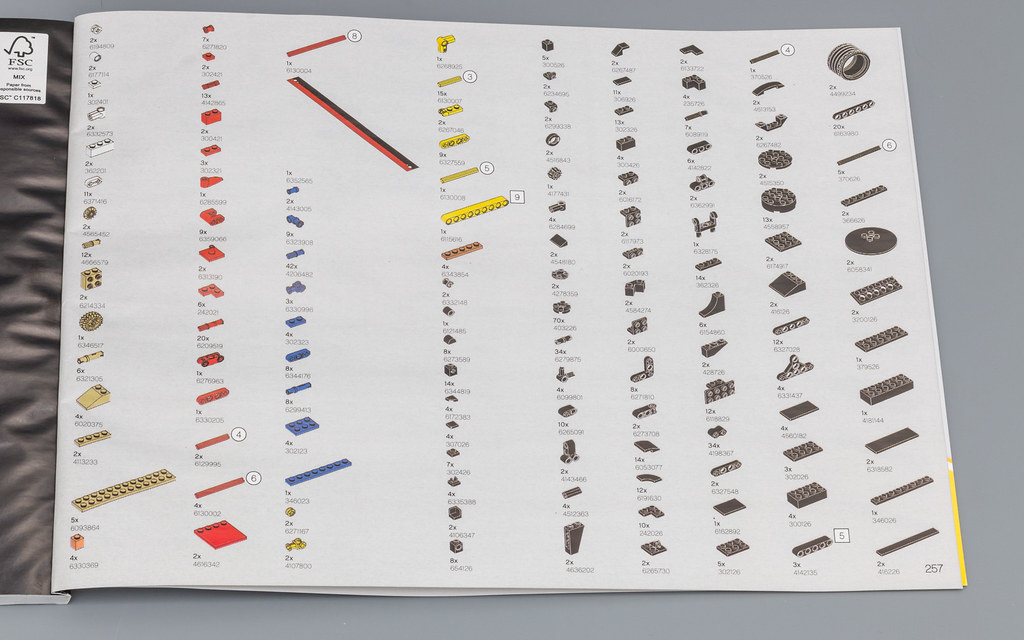 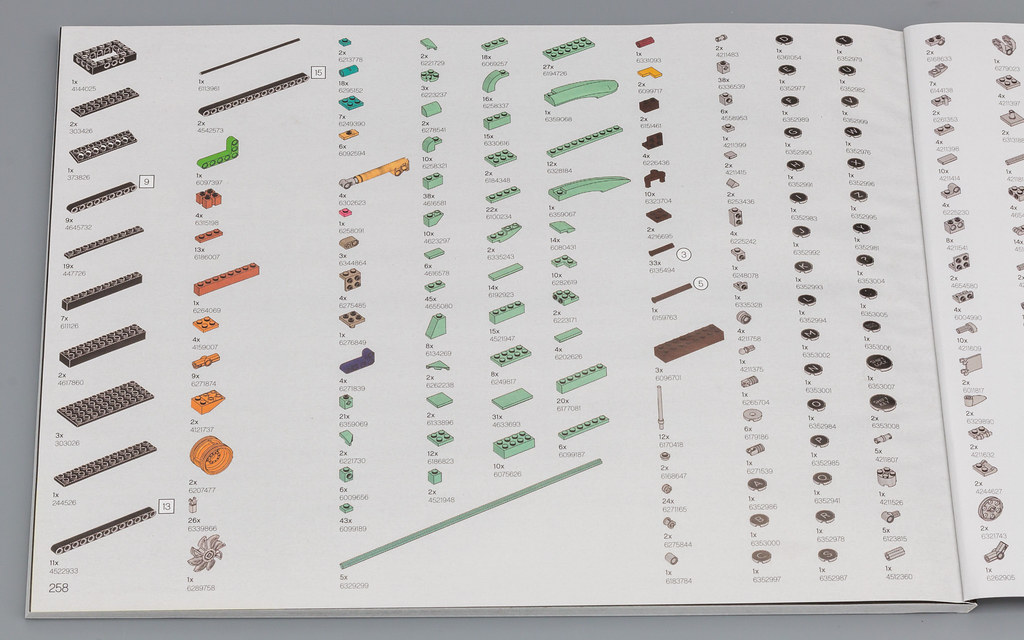 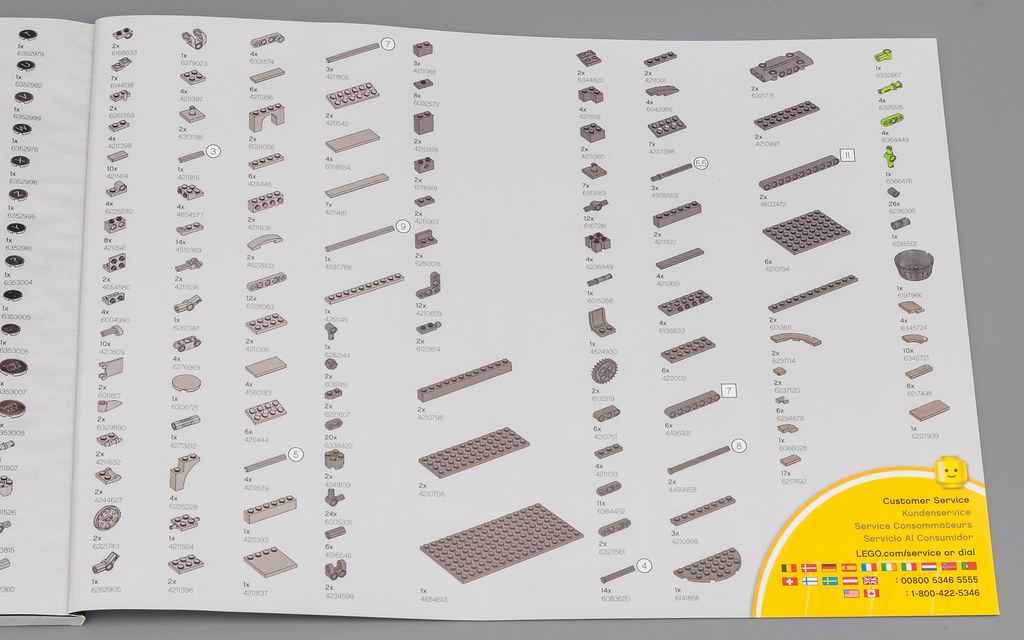 The original concept for the typewriter came through LEGO fan Steve Guinness’ submission to the LEGO Ideas platform, a LEGO initiative that takes new ideas that have been imagined and voted for by fans and turns them into reality.   Discussing his idea, Steve said: “I wanted to create something totally different from anything that LEGO has ever done before and showcase that you really can make anything out of LEGO. I bought a vintage typewriter for my research and then played around with bricks and the mechanism until I was happy with the design.  I hope it will bring nostalgia to adult fans like me, and wonder and curiosity to younger fans who might not have ever seen a real typewriter!”

Unfortunately, the build doesn't start with the interesting part. You immediately need to repeat some steps nine times. This sub assemblies are used to connect the keys. One way or another, we do need at least 26 keys, so this set was bound to have some repetition.

Here's the back of the frame holding the different keys. I expected the 32L liftarm to be a spare, but it turned out it wasn't. The three smaller parts are the usual spares. 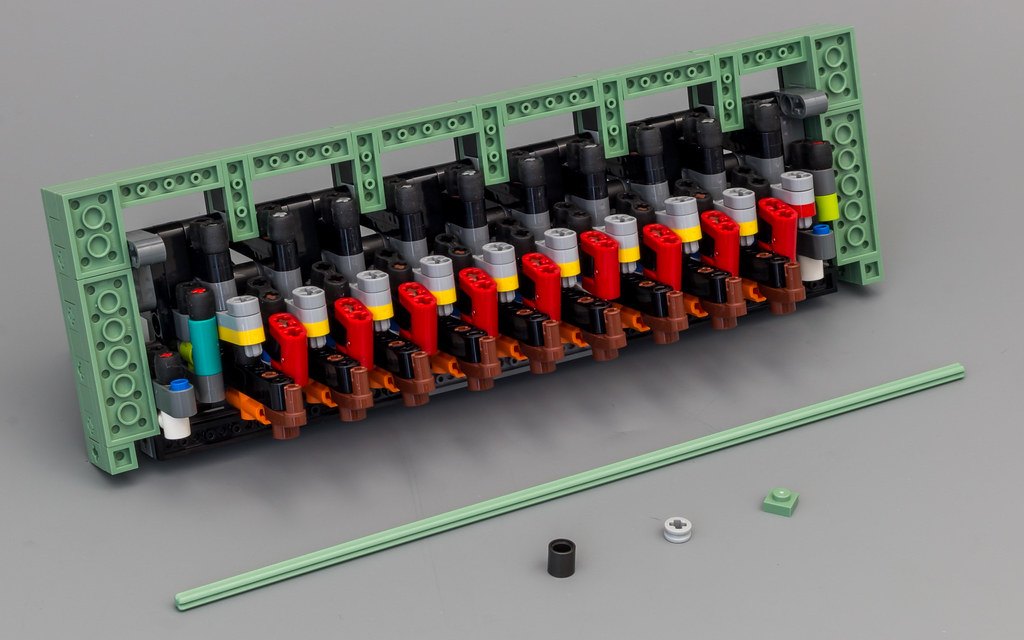 Each liftarms will hold one of the keys. 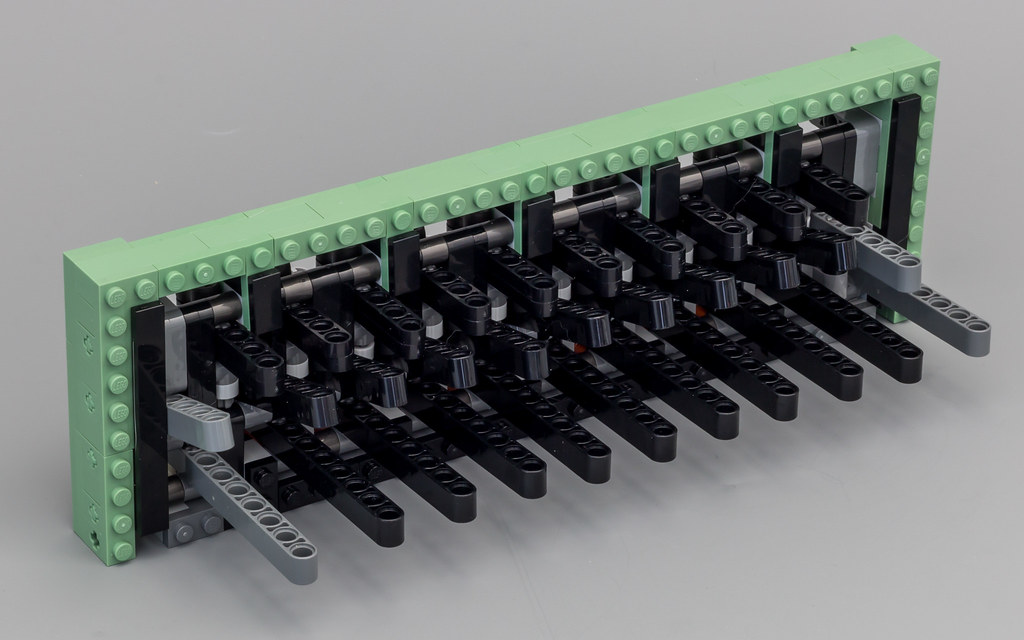 One of the key features of this set...you get it...key...features....hilarious..... Anyway, these keys are printed, yay!! They are so versatile, that I am certain we will see them in a lot of modular building MOCs. And I am really looking forward to being surprised by people using these tiles in unexpected ways.

The keys attached to the frame. They are attached using pins so they can rotate (with friction). No big deal. 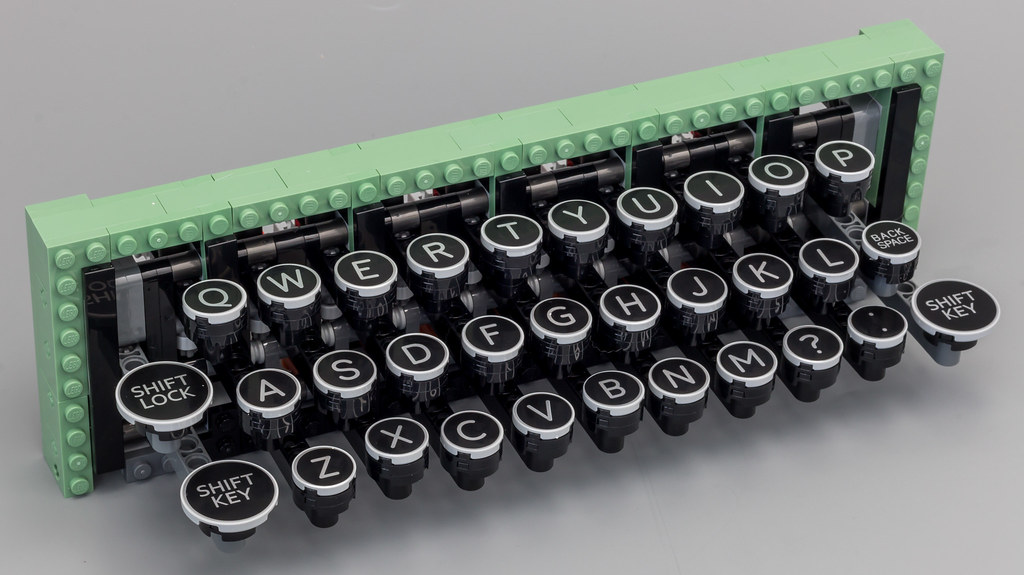 Here you can see part of the typing mechanism. 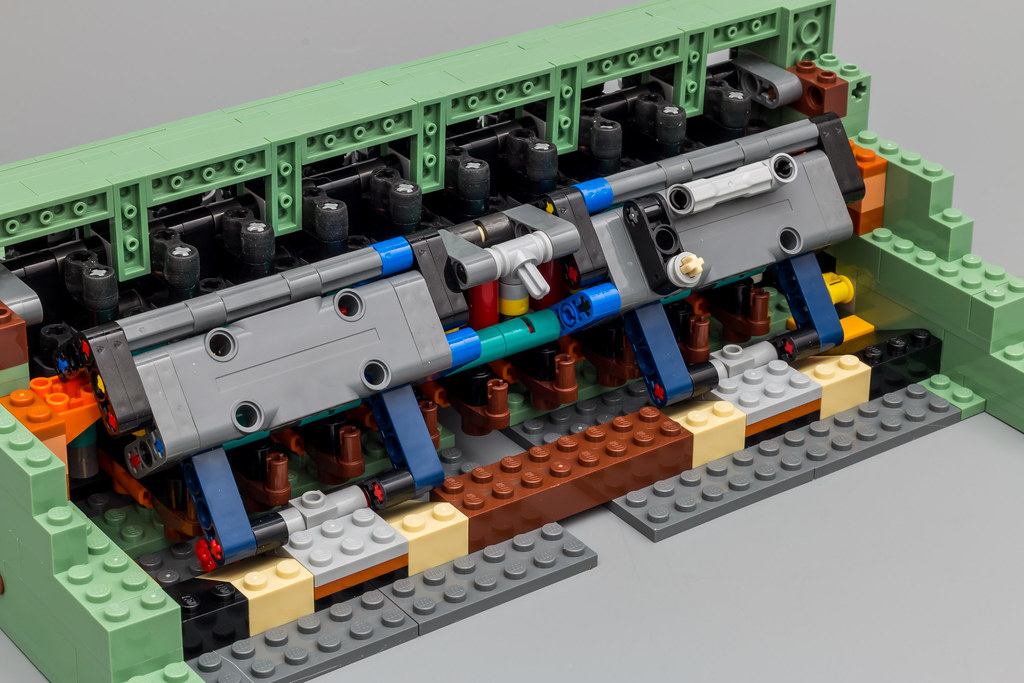 The spacebar and "bodywork" complete the front. The build is somewhat flimsy in some places. The front part is one of them. Pieces can fall off easily. 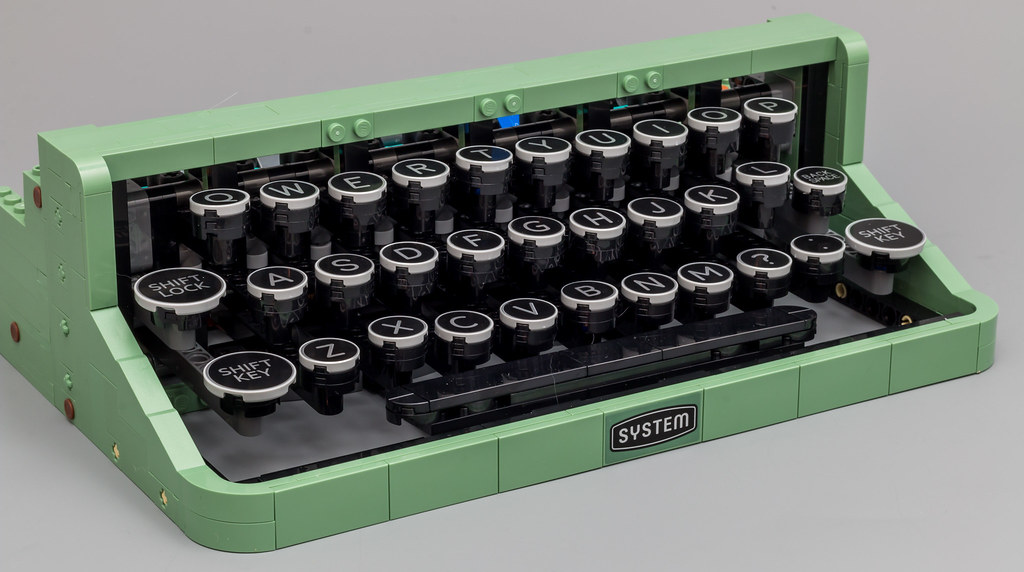 The top view of, what we now call, the "keyboard".

Stroking each letter (not the other keys) results in the center typebar moving up. 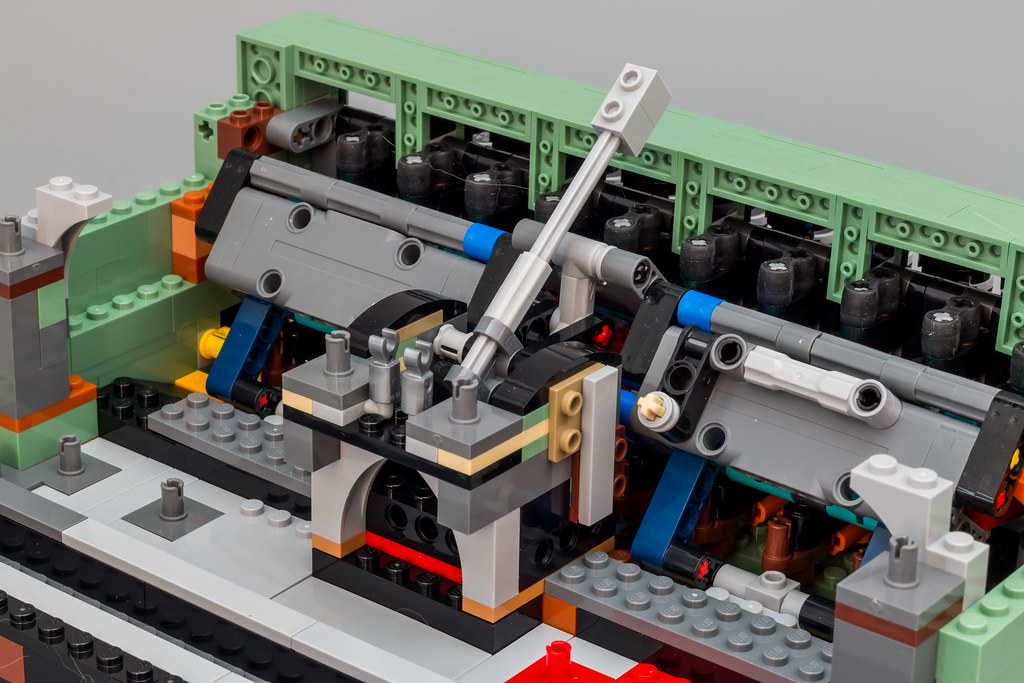 After completing the body of the machine, you will build various subassemblies to complete the typewriter. I really like how these assemblies worked out. They do look authentic. 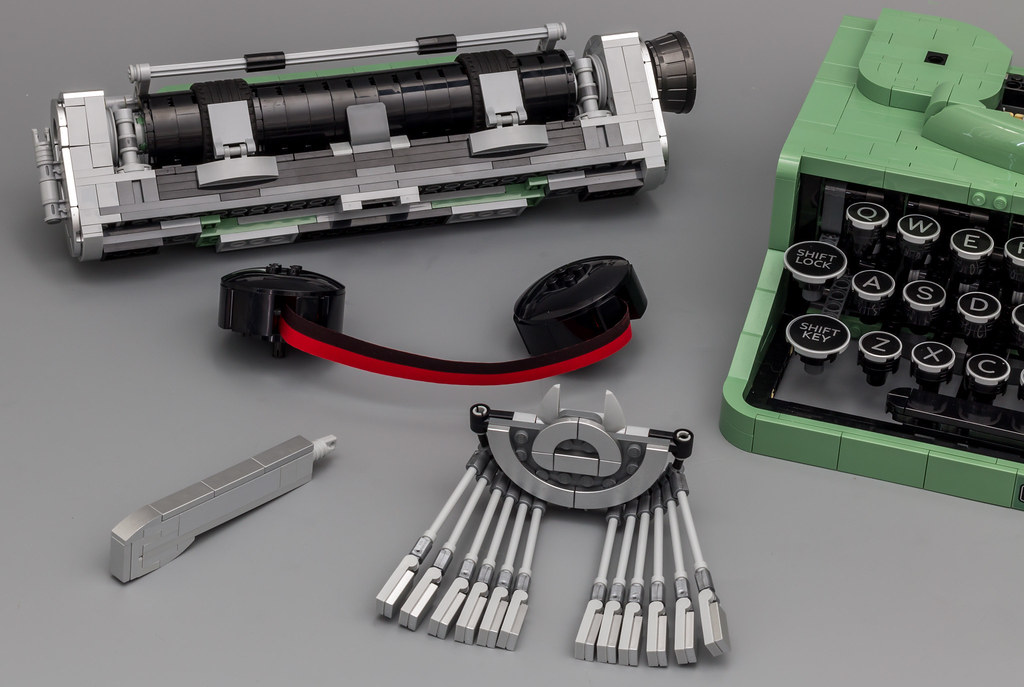 Attaching the carriage, dummy keys and lint cartridge to the typewriter completes the set. At the front you can see one of the stickers. At the right there is a lever to switch between black and red colored text. Unfortunately, this is a dummy lever. I would have been nice if this lever actually did someting. Same goes for the lint cartridges. They are static and won't turn when typing. I understand that there are limits to a LEGO set, but it would have been a nice addition. And maybe not even that difficult, since the carriage is moving when typing (see video below) and there are already some rotating parts. 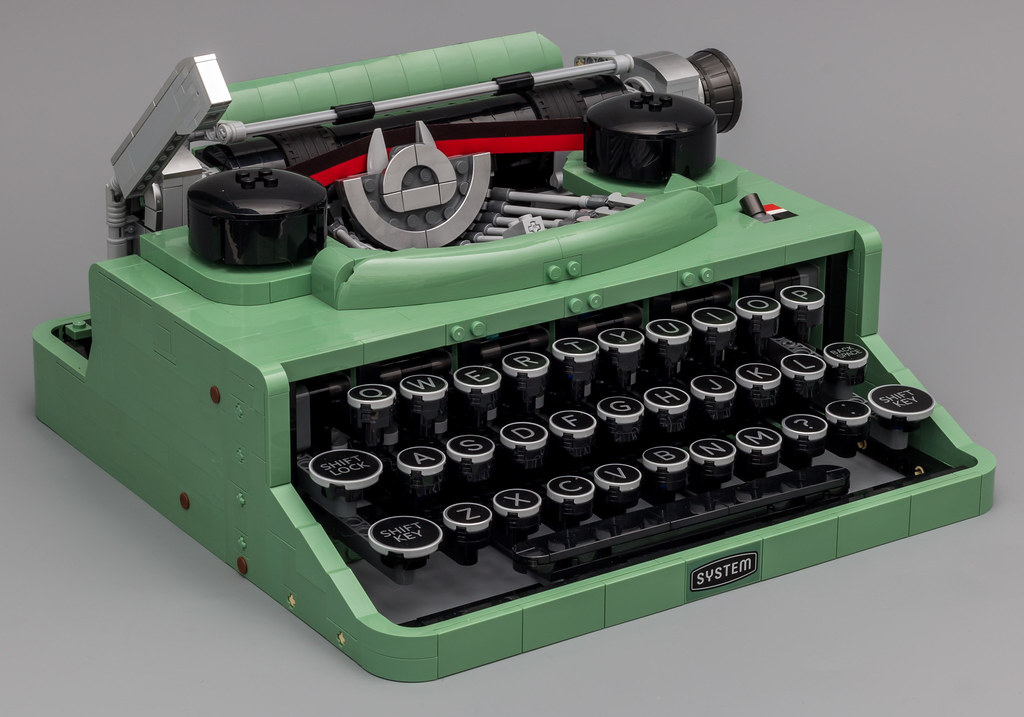 At the back you will find the second, and last, sticker of this set. There's a handle attached to the carriage. In real life you use this handle to yank the carriage back in starting position. This handle is also somewhat flimsy and the instruction manual clearly states not to use the handle. You need to push the carriage at the bottom of the handle. 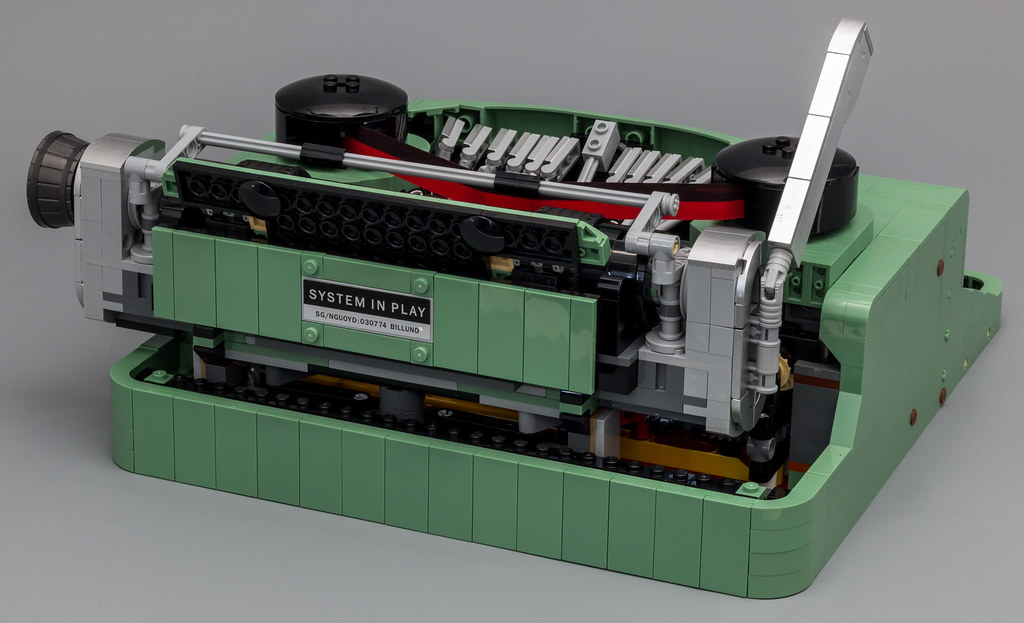 Another picture of the back at a slightly different angle. 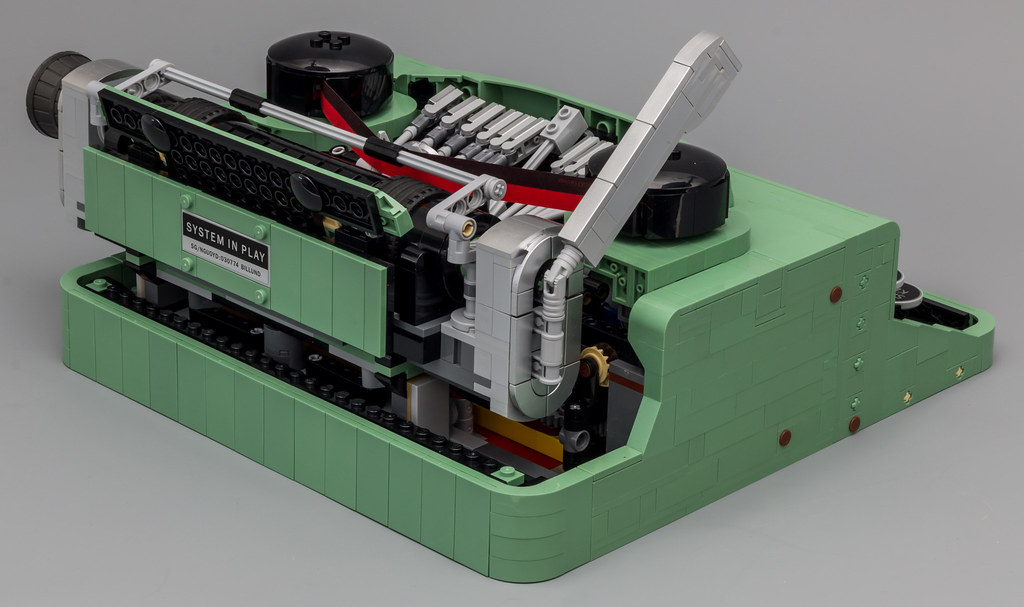 Some keys have rotated a bit when doing some typing. 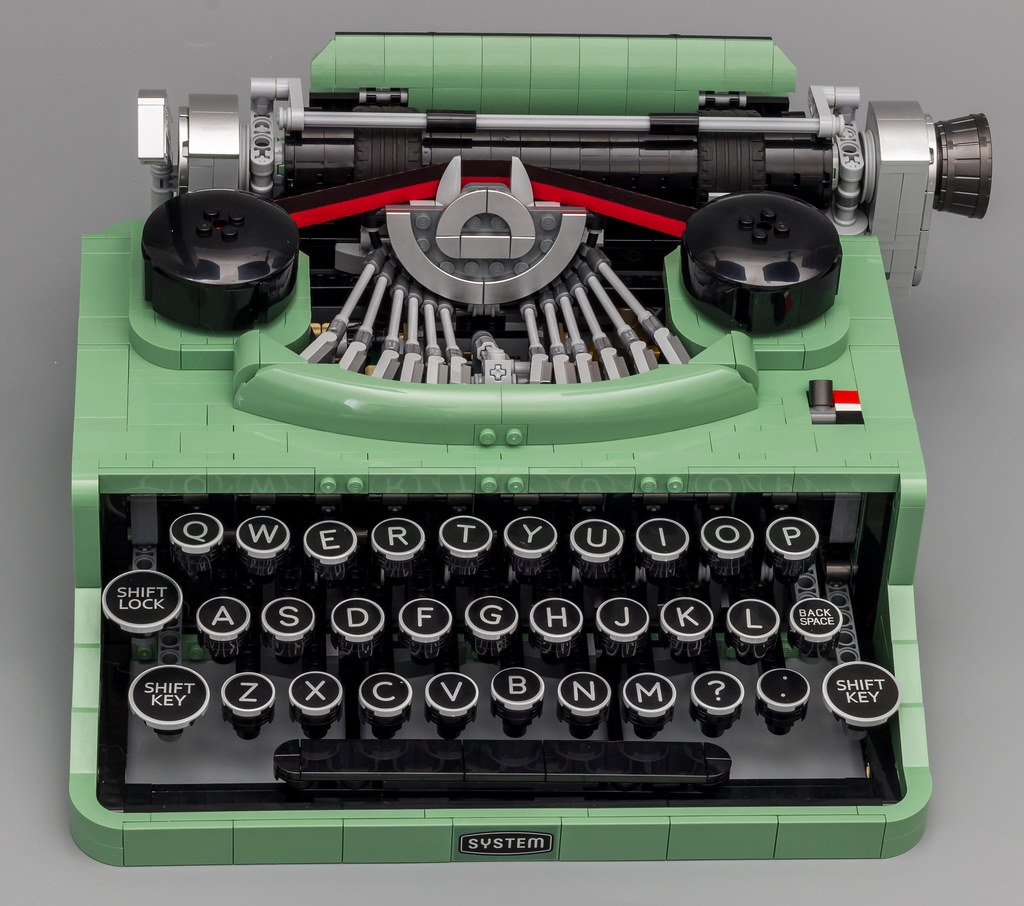 They keys don't all return to the same position when used. I reckon that is genuine typewriter behavior hehe. 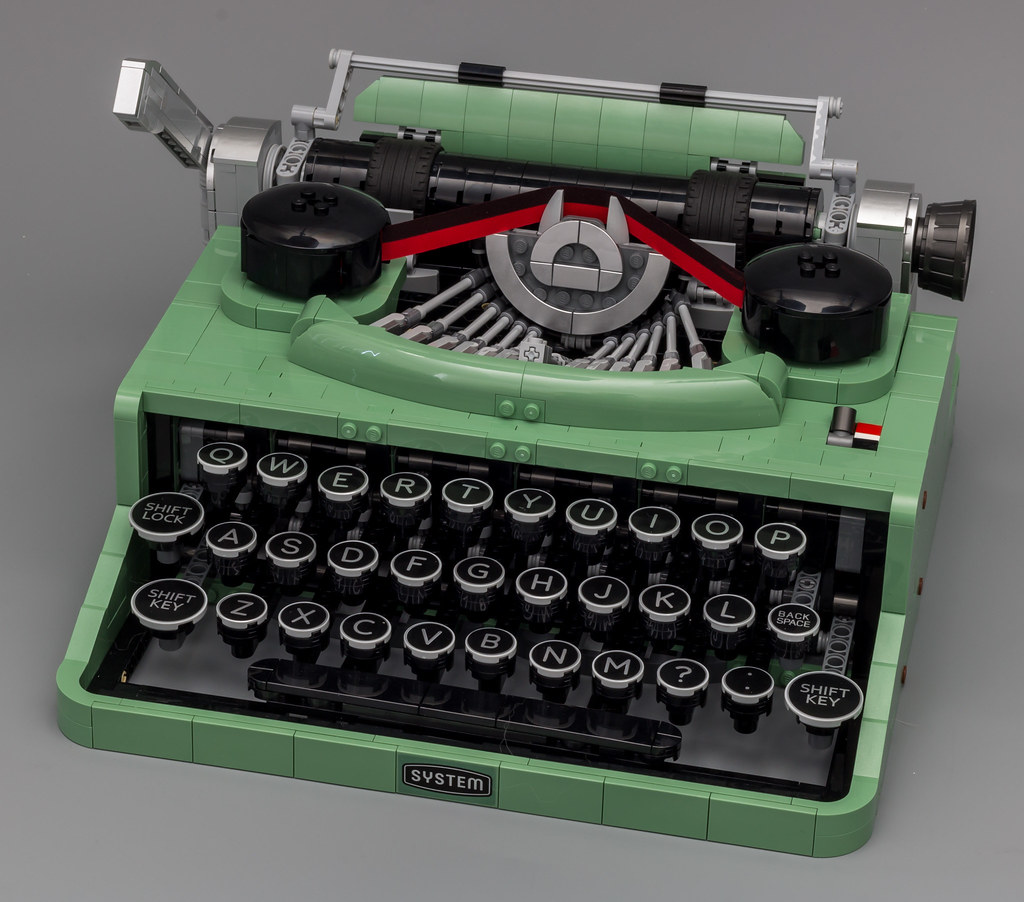 And one final picture with some post crop vignetting. 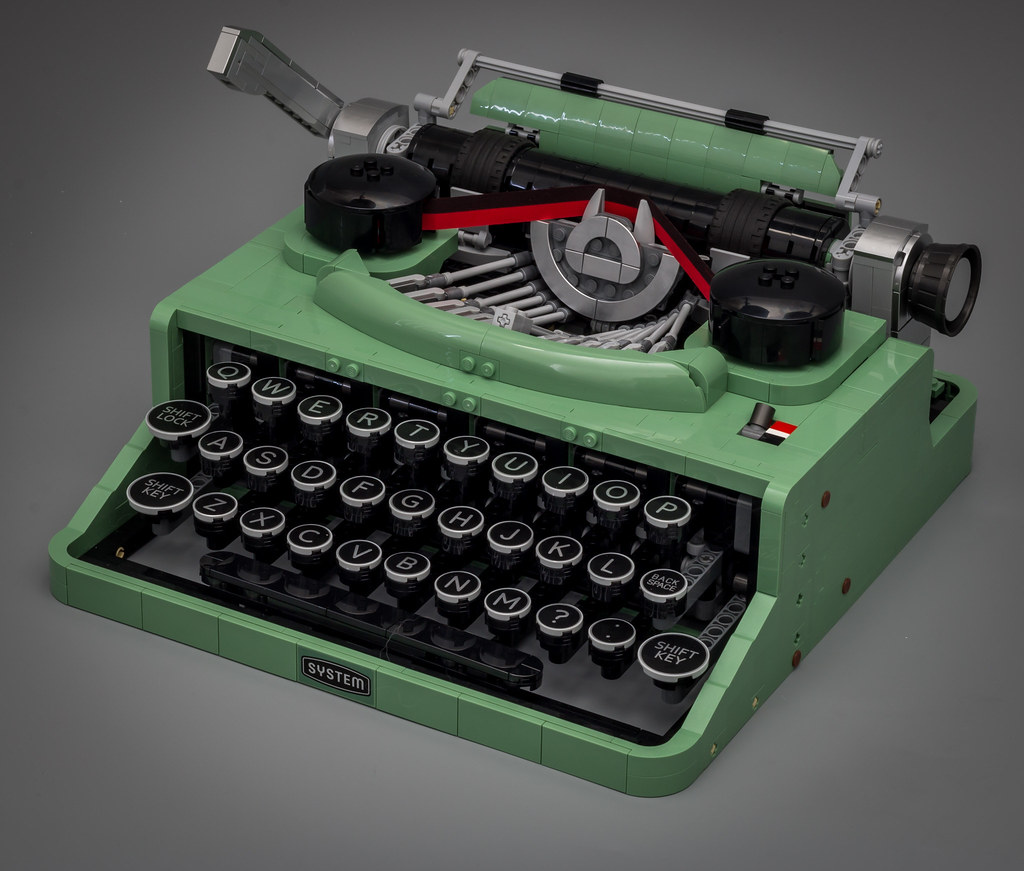 Let's start with the functions that could have been (and arguably should have been). As mentioned earlier the ribbon is static and doesn't move when typing. The lever to switch between red and black isn't working either. The handle on the carriage return is to be handled with care. To be honest; I expected one or two more working functions, so I am somewhat disappointed in that regard. Was it really that hard to have the ribbon move up and down at bit while switching the lever? And was it really that hard to have the cartridge ribbons rotate while typing and rotating back when the carriage returned to starting position? It probably was that hard, but I still feel it could have been implemented.

While the lack of functions might be somewhat disappointing, the typing mechanism more than makes up for it. It is so cool to see the carriage moving and hearing the rattling sound of an oldskool typewriter. A picture is worth a thousand words, but in this case we need a video demonstrating the typing mechanism.

While the concept of the typewriter dates back to the early 18th Century, Steve’s design, and the LEGO design team’s development of it, captures the styling cues of the modern 20th century typewriters, which still have a cult following today.

So, what do I think of this set? To be honest, the set is somewhat underwhelming. I was actually looking forward to building it and finding out how all the intricate mechanisms would work. Instead, the build was repetitive, fiddly and flimsy at some point. I had to be careful where to grab the typewriter to avoid parts falling off. Since this is an 18+ display piece, that doesn't bother me that much. The lack of extra functions is bothering me more. I always claim that it's better to live with low expectations so you won't be disappointed and this set is a prime example of the opposite. I simply expected more of this set and now I am left with a somewhat disappointed feeling. The end with a positive note; the typing mechanism is awesome and the set does look stunning on a side table!

I absolutely love the oldskool genuine look of the Typewriter.

Repetitive and somewhat fiddly and flimsy. Not the most enjoyable build.

Typing mechanism is awesome, but it needs an extra working feature.

Not much more than hitting the keyboard and returning the carriage.

Other than the sand green collection of parts, not a lot of interesting parts.

Price is a bit steep for a non-licensed set.