My last review started with the sentence "Here we are, for most likely the final Technic set review of this year". Yet, here we are again. Apparently, I was mistaken and here's another review. The set number indicates that it was originally planned for this year (2021), but not hearing anything about it fired the rumor that it was postponed till 2022. I have no further information about why the set has been released "all of a sudden".

About the set. Well...yeah...about the set. I am not a huge DC or Marvel fan, but I do like the occasional superhero movie. Batman is actually one of the movies I tend to watch. And to be honest; the Tumbler is one of the coolest movie vehicles ever. I still have the 76023 - Tumbler built on display. Even Kitty (my wife) loves the Tumbler. So, I was anxious to see what a Technic Tumbler would look like. Technic Tumbler?! You probably mean the Technic Batmobile! O wait, it isn't a Tumbler. Not all Batmobiles are Tumblers. I automatically assumed Tumbler, but that obviously isn't the case.This is the Batmobile from next year's The Batman movie. Needless to say I was disappointed for a few seconds, but I understand they can't keep using the Tumbler. Wait, ignore that. Of course they can...and they should hehe!

Okay, enough with the joker...uhmm jokes....let talk about this version of the Batmobile. The version that looks boring and horrible. There you have it, I said it. I am almost reluctant to review this set, because it has very little appeal to me. The back looks okay and kinda cool, but the front-side looks like * beep *. So I wondered; maybe the actual Batmobile from the mobile looks horrible too. Well, it doesn't. It's not as cool as the Tumbler, but it still looks like a proper Batmobile. There's even a cool brick built version on Rebrickable. 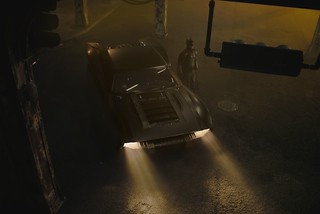 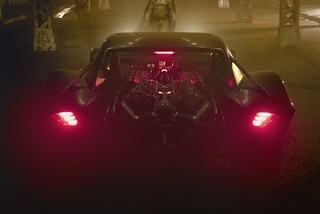 All things considered, I am not too excited about this set, but the fun part about reviewing a set you don't like beforehand (yes, I am talking about you 42050 - Drag Racer), is that you might be surprised.

PICTURES
Pictures can be clicked to view hi-res versions. My Flickr album contains all the photos taken for this review.

DISCLAIMER
The CEE Team of TLG has provided this set. It's not my goal to promote this set. It's my goal to give you an honest opinion about it. Therefore, the opinion in this review is my own and is in no way linked to TLG.

Batteries not...wait a minute...batteries included is shown on the front of the box. This hardly ever happens with a Technic set. It's because this set features a light brick, often found in City sets and the like. The light brick provides the orange glow you see beneath the hood of the vehicle. 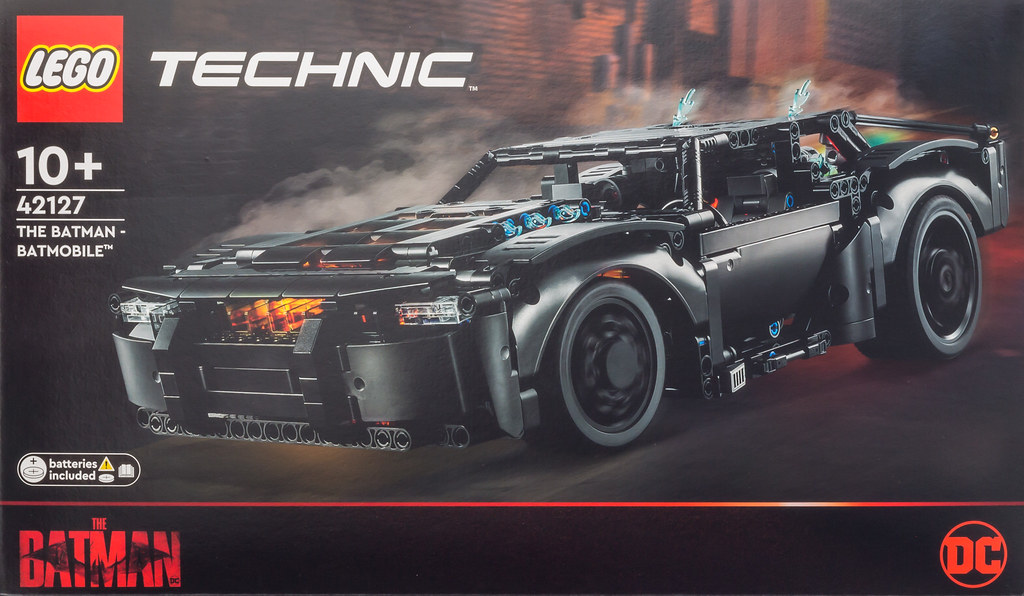 The back of the box shows the rear of the vehicle, which is actually the most appealing part of the vehicle for me. The thumbnails show all the functions, like opening the doors and the hood hehe. The box doesn't indicate steering, but the front wheels are slightly rotated. If you take a close look at the roof, you will see an axle where the HoG (Hand of God) steering will be placed (it is visible in the first thumbnail by the way). This is a technique which TLG used in the Ford Raptor as well. Having a detachable steering knob provides playability and displayability, which is a good thing! 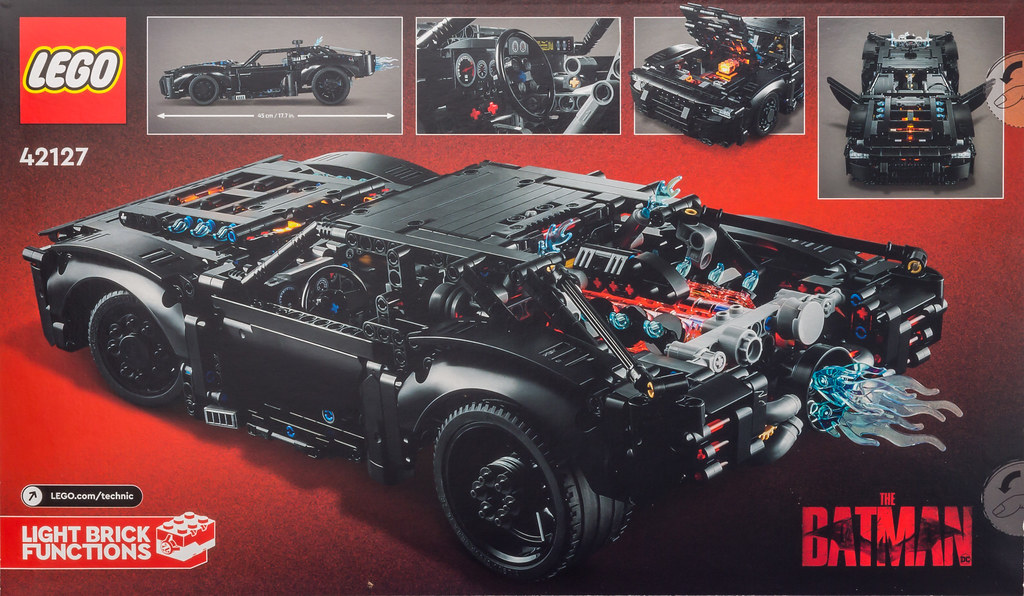 INSTRUCTION BOOKLET
A regular booklet for a set this size. 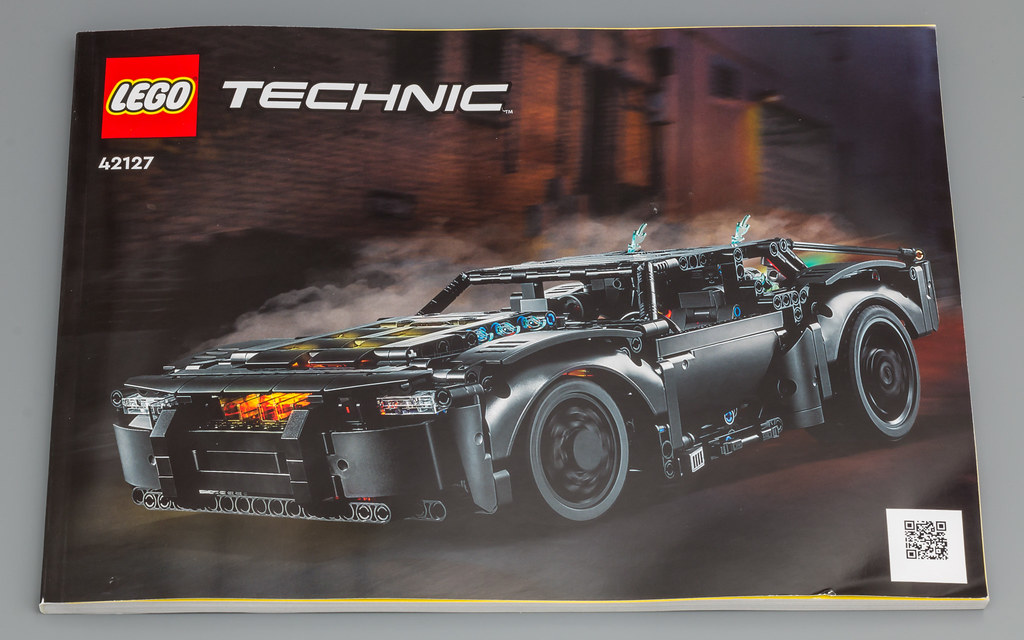 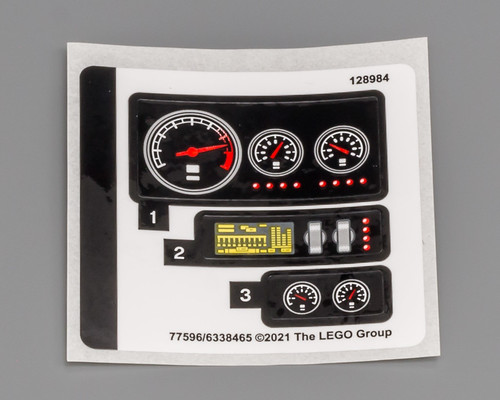 ARCHED 13x2x5 MUDGUARDS WITH ROUNDED TOPS
I hardly ever get this right, because I have mixed up numerous times in the past, but these panels seem to be the ones found in the 42125 - Ferrari 488 GTE in black.

TIRES AND RIMS
The tires and rims are nothing out of the ordinary. The front wheels can be found in the Dodge Charger set and rhe rear ones in the Porsche 911 RSR. 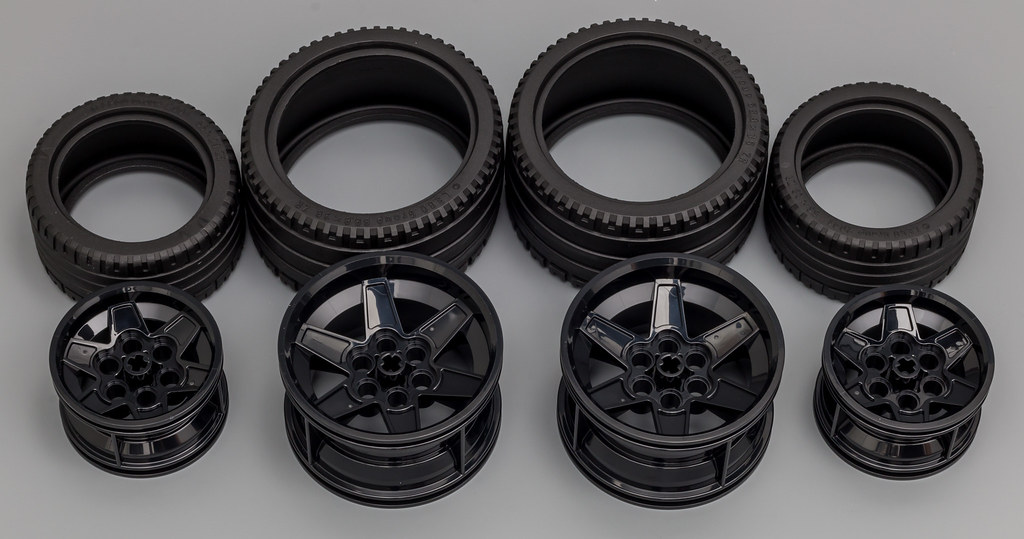 2x3 CURVED PANEL
This panel is relatively new. I has been released in black before, but if you want a larger quantity, this might be the set for your. 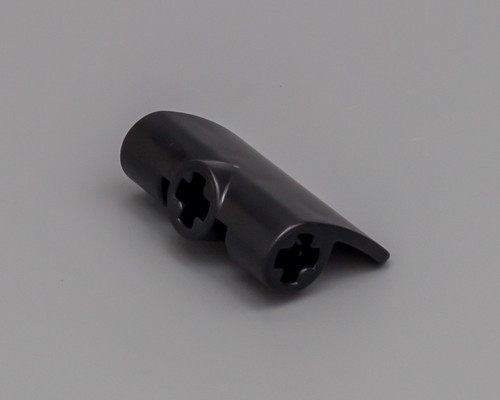 LIGHT BRICKS
This is a part you rarely see in a Technic set. And by rarely I mean never. 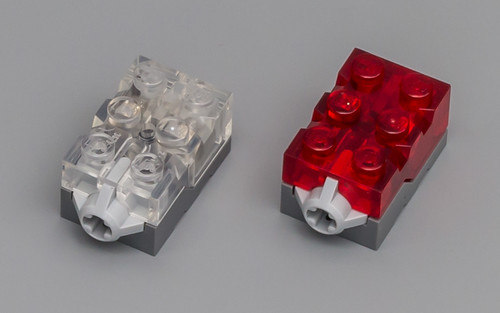 TRANSPARENT CYLINDERS
We have had transparent cylinders in the past, but this is the first time we get the new mold. 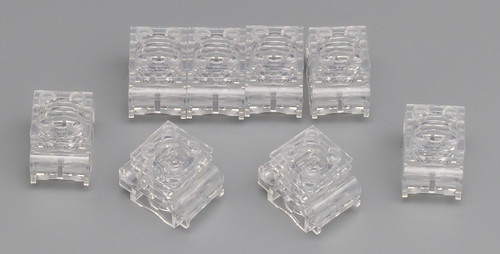 2L AXLE WITH PIN
This part has been found in other non Technic sets already, but it's making his Technic debut in this set. It's the non-friction counterpart of the black one. Funny thing is that, in my opinion, it wasn't necessary in this set at all. Could have easily used the black one, but a white one was used to simply connecting a small subassembly. At least, that's my assumption. 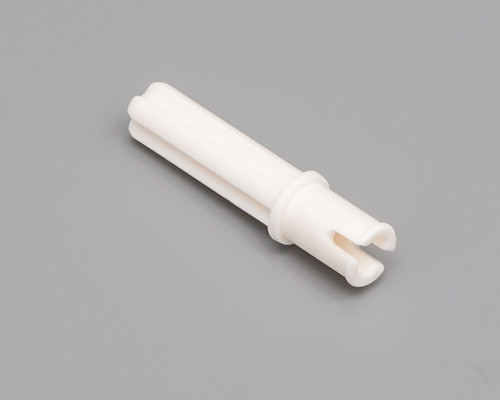 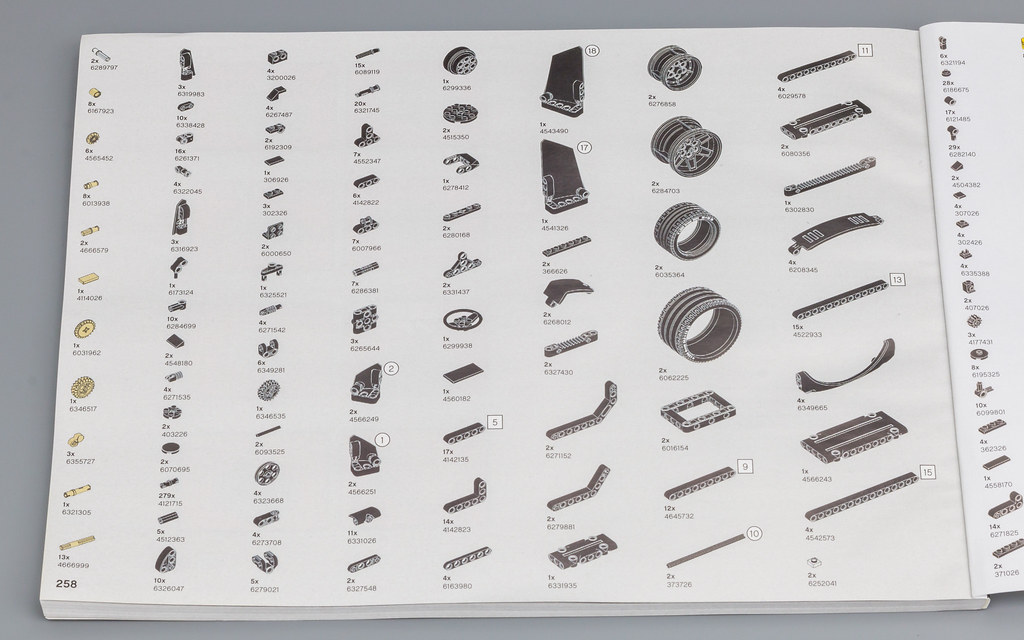 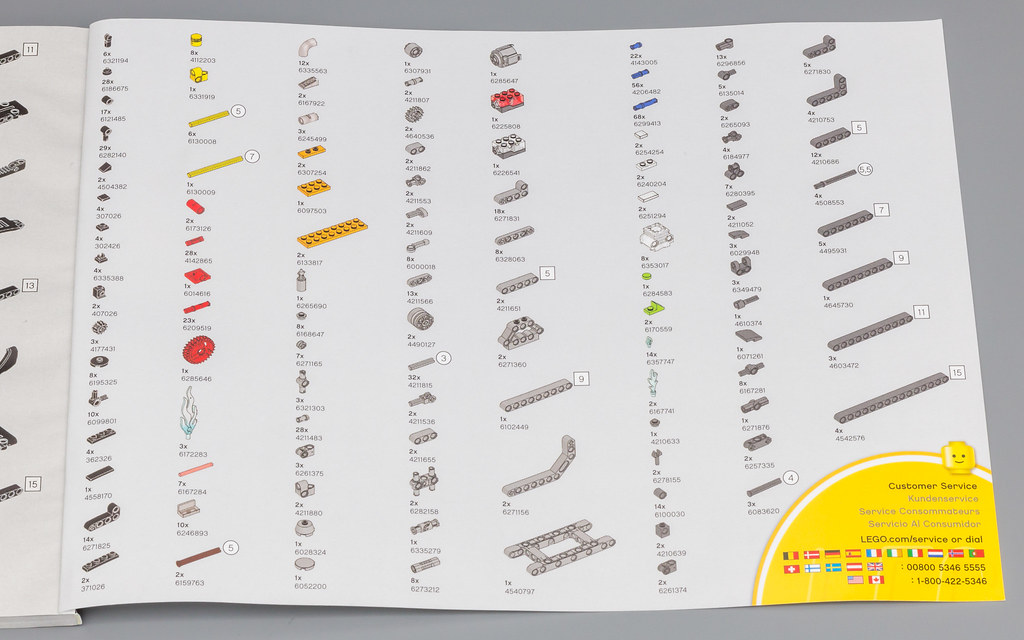 Let's find out if the build is interesting enough for me to change my mind about this set. It will be a tall order, since I built the CAT recently and that build was incredible. The build consists of seven steps.

STEP 1
The front and rear part of the chassis are connected, but only by a single pin on each side. It's not very sturdy at the moment, but that will probably be fixed later on. I'm guessing mounting the seats will fix the issue.

STEP 2
The transparent motor not only looks cool, but it allows you seeing the pistons move. Since the cylinders have been closed by a 2x2 round tile, you wouldn't see anything happening.

When I attached the "steering wheel assembly", I wasn't sure whether I mounted it correctly. It's not entirely secured to the chassis, so it has some movement. Then I realised that pressing the steering wheel, results in hitting the switch for the light brick. So, when you are driving/steering the model, you can press the steering wheel down and the light comes on. This is a neat solution. 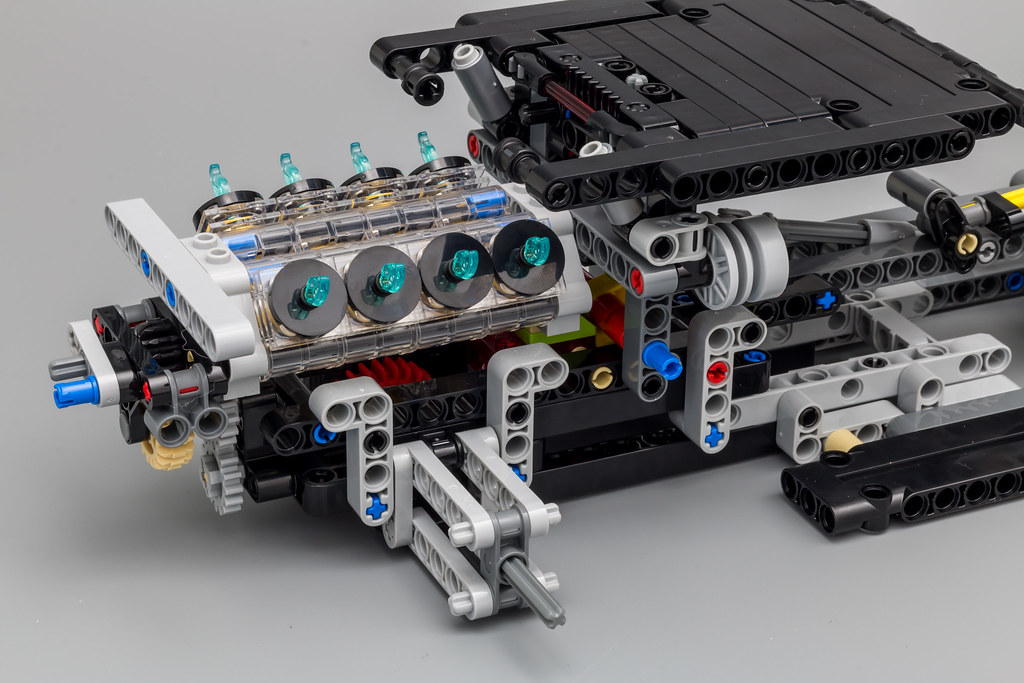 Forgot to add the spare parts. Here they are. 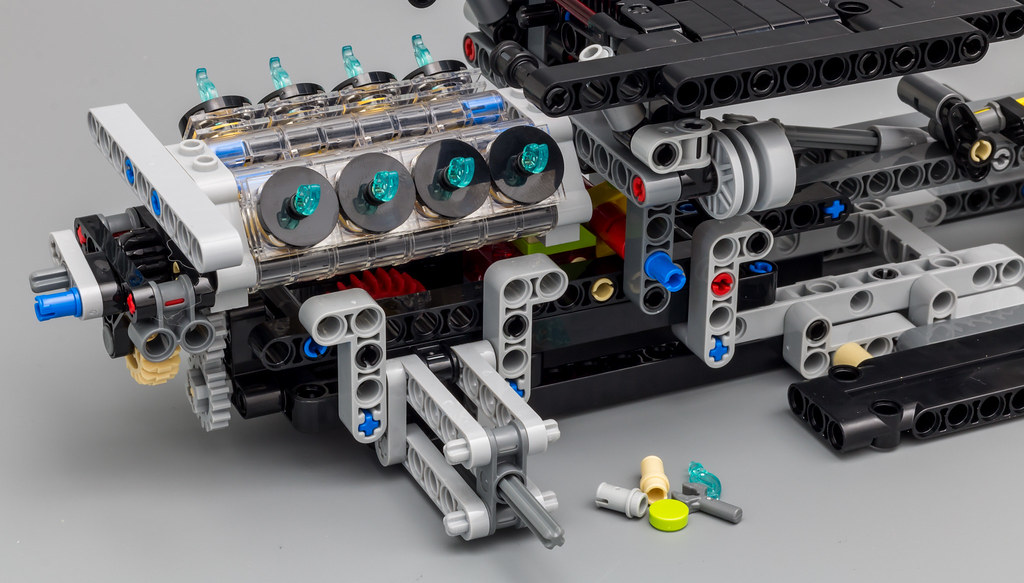 The other light brick is activated by a lever in the "cockpit". I'm assuming this is the throttle for propulsion. 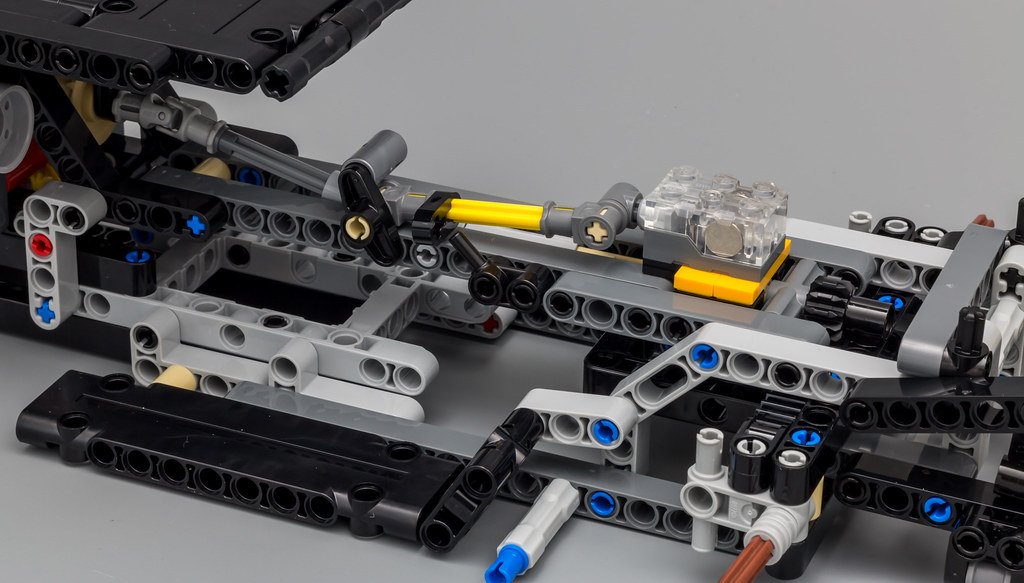 STEP 3
The following steps pretty much boil down to completing the bodywork, starting with the front right fender and door. I do have an issue with the fenders in the front. More on that later. 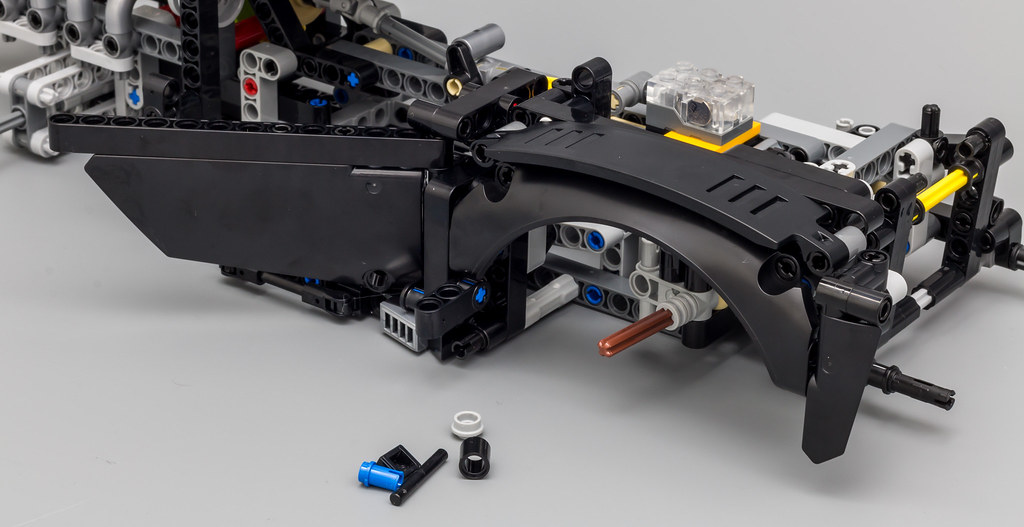 STEP 4
The front bumper looks aggresive. I do like the design of it. And the hood made up of the small panels is a nice solution as well. The gaps aren't too big, but big enough to clearly see the light brick's effect. 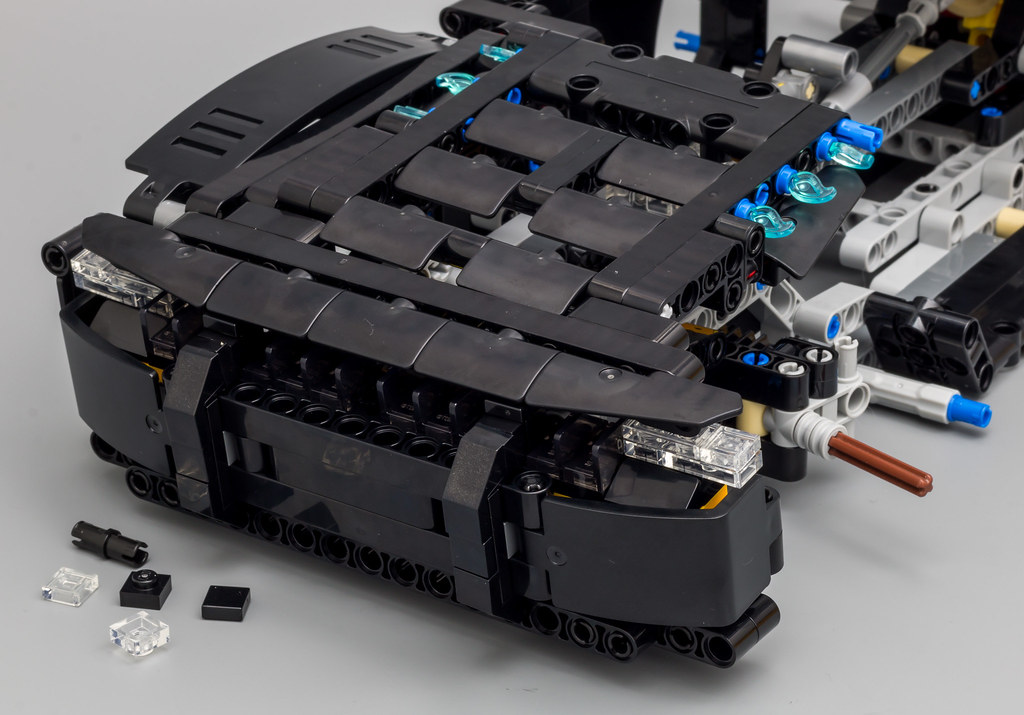 STEP 5
This step is almost identical to step 3, but you build the left front side of the bodywork. I wasn't sure why I took a picture of the rear instead, but you also add the macaroni parts at the back. 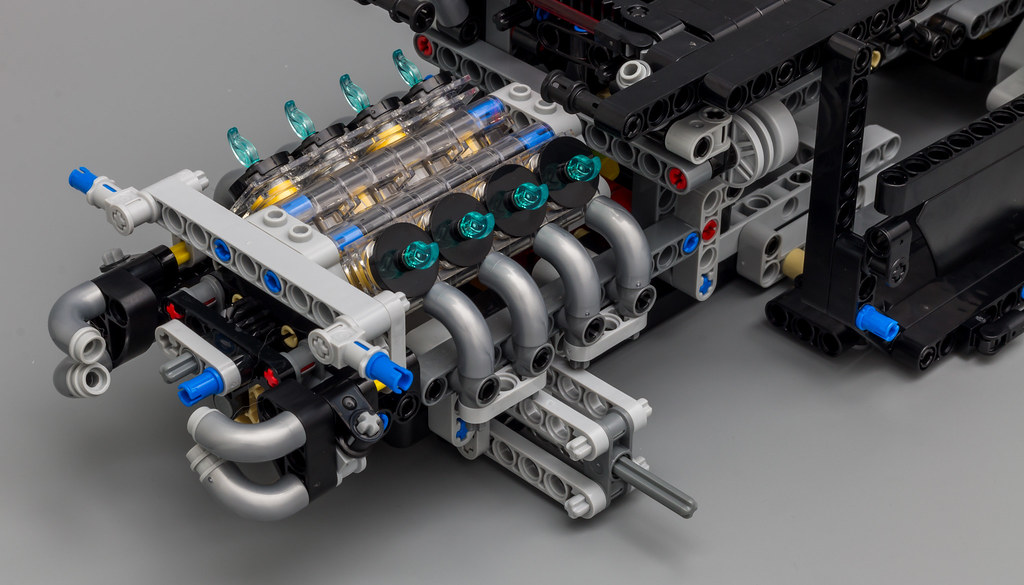 STEP 6
The rear of the car is starting to look decent. I like the open engine bay where you can see all the action. 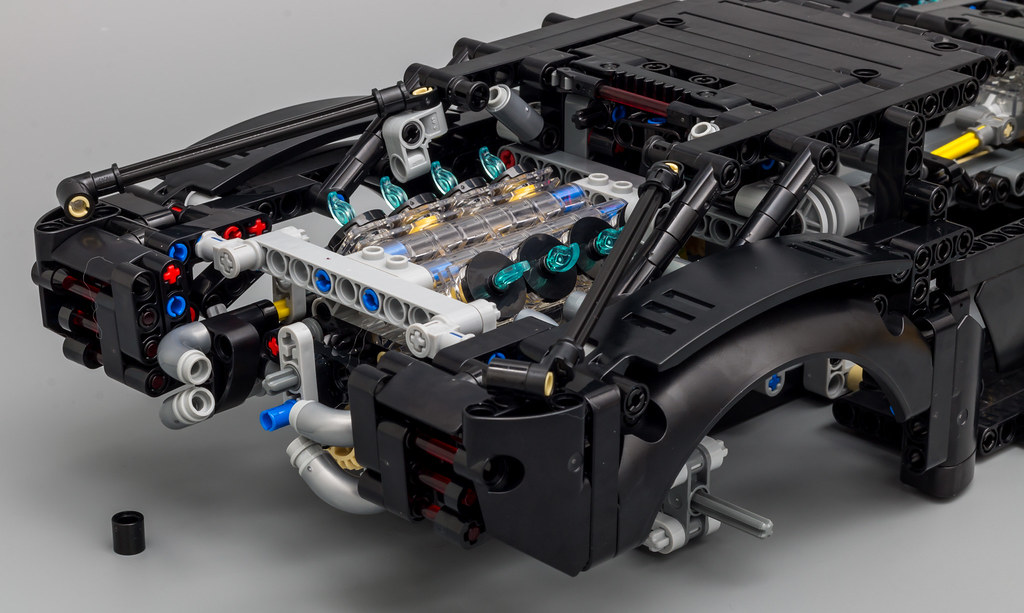 STEP 7
The last step is to mount the seats, wheels and the flames. Are those actually flames, or some sort of exhaust fumes?! Given the color of the flames (also the smaller ones), maybe they are some sort of ice flames (if those even exist hehe). I guess we'll have to wait til the movie comes out. The seats indeed provide stability to the chassis. 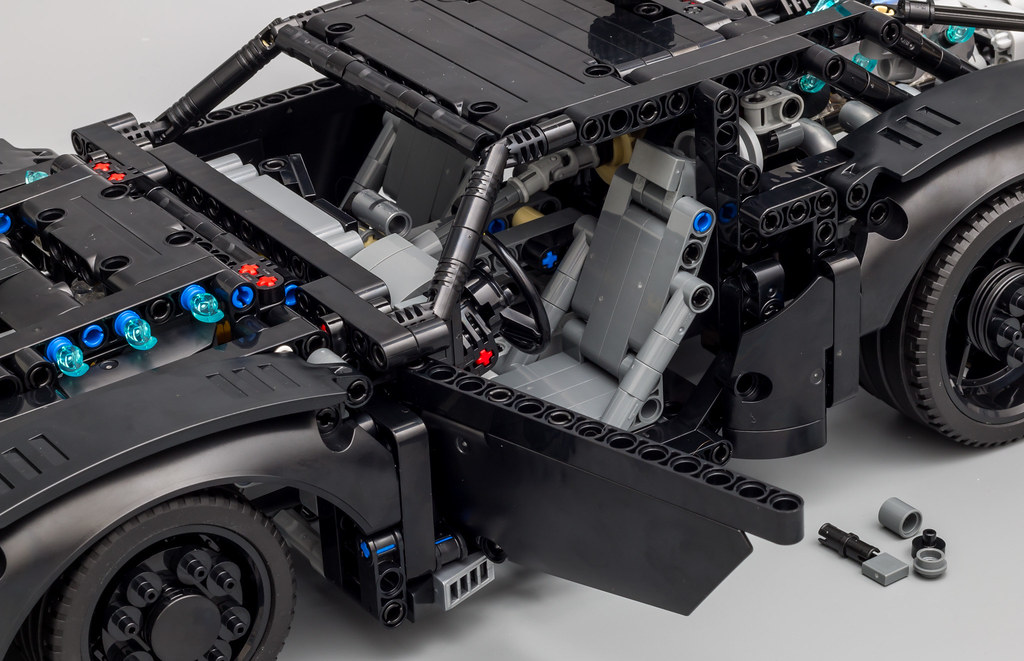 Okay, let's talk about the front fenders. I am not a big fan of the curved panel on top of the fender panel. The solution kinda works in the rear, but it's a major no-no for me in the front. And I don't think curved panels are causing the issue, but the fenders. The smaller wheels in front makes this construction look horrible. A better solution would have been to fall back to a flexible axle solution or possibly design a smaller fender panel. I mean, just look at the picture....is that really the best solution?! 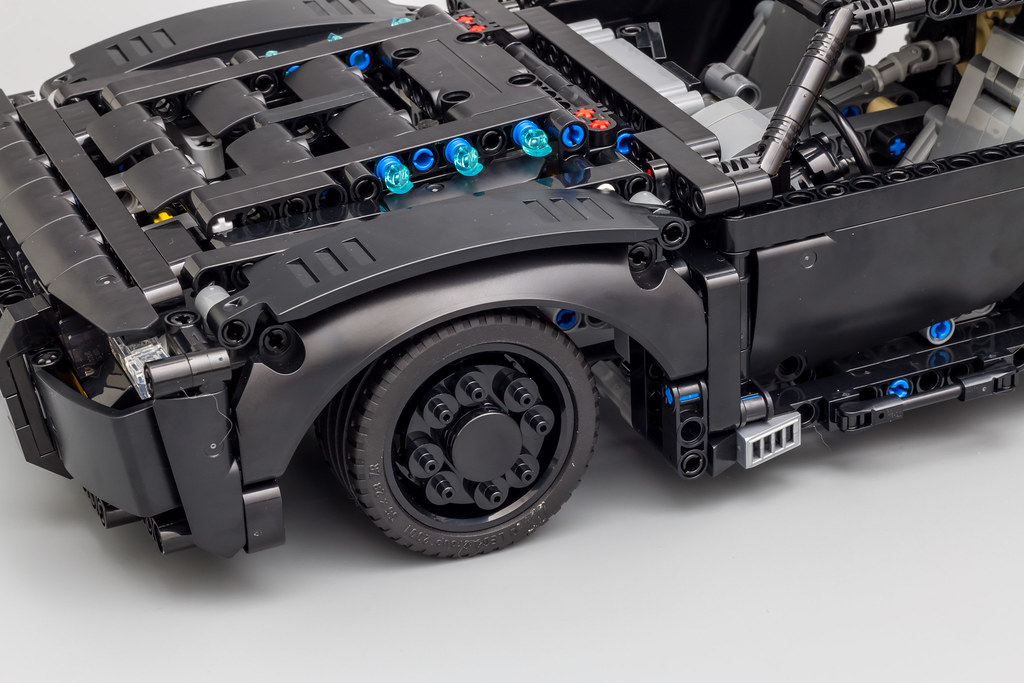 The completed model does look better in real life than in the pictures, but I is definitely not my favorite set. Is it worth buying? Well, the price is okay and you do get some cool new parts. It's not a bad set to pick-up. 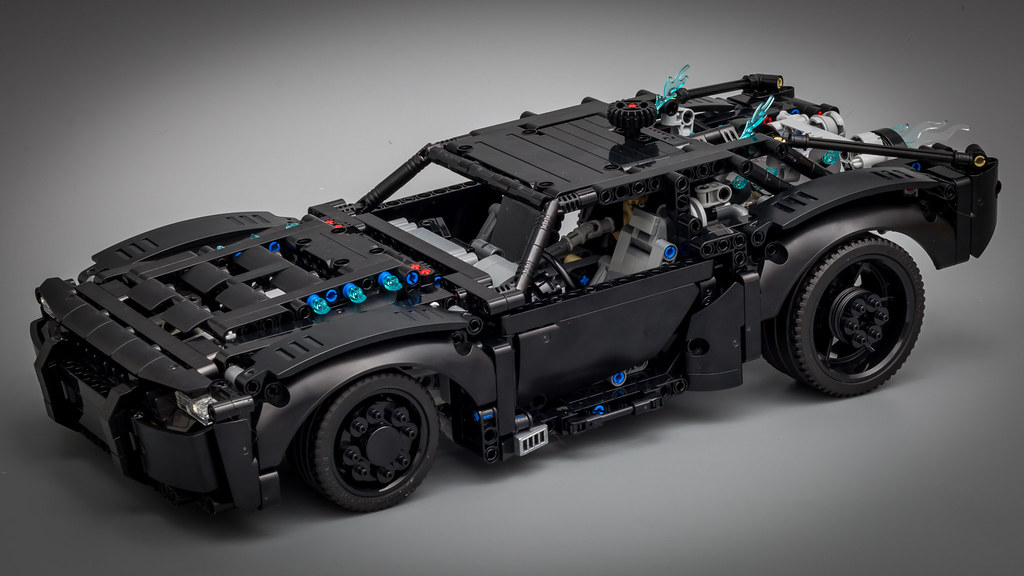 What I also like is that TLG is releasing movie vehicles. I haven't built Dom's Charger, but I noticed that a lot of people (maybe not us, hardcore AFOLs) liked that set for what it is. You get a nice model for a reasonable price. Which seems to apply to this model as well. 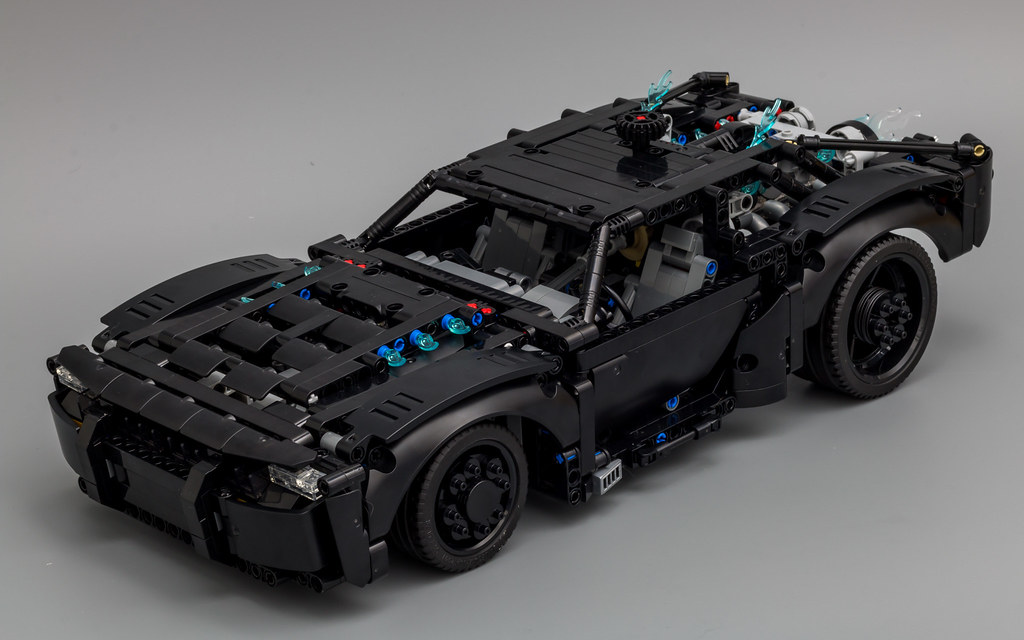 The hood and doors can be opened. 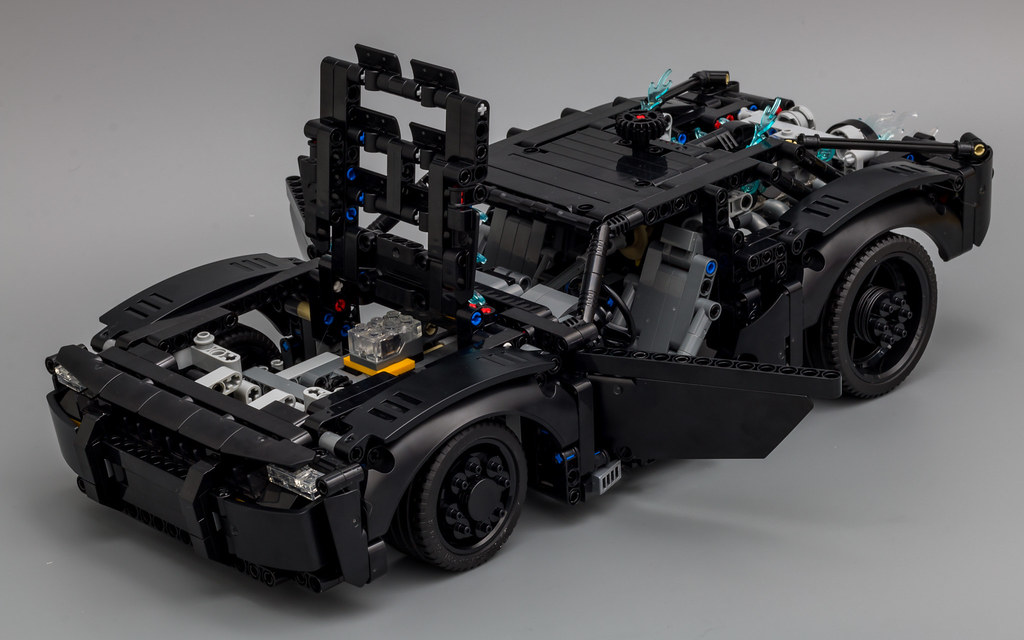 The rear is probably the part I like the most. I genuinely breathes Batman. 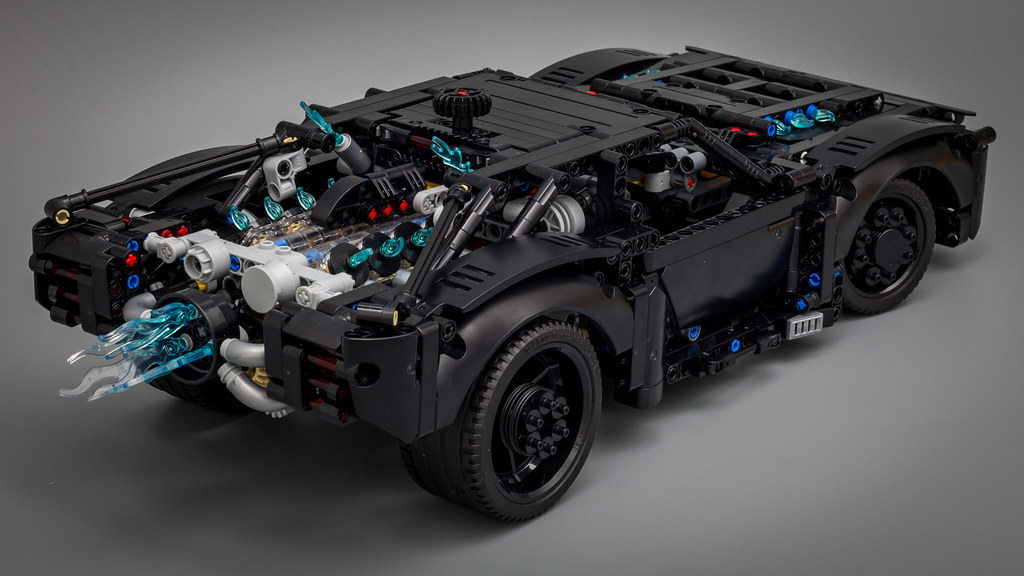 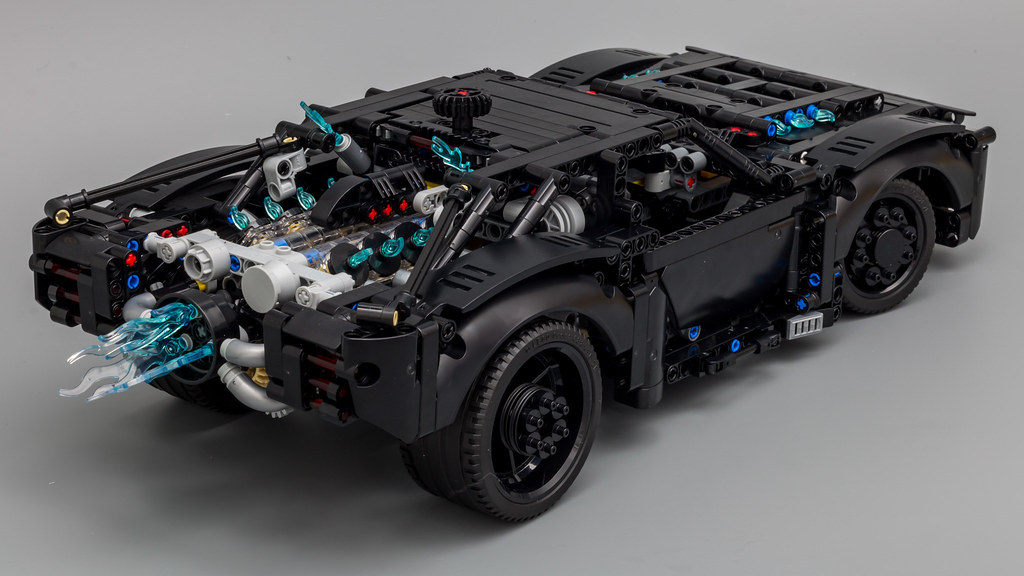 From a slightly different angle.

The chassis feels a bit flimsy (especially before you mount the seats) and this picture shows why.

I'm sorry, but I just can't get past the front fenders. They are so out of place. On the other hand; I haven't seen a clear picture of what the "actual" Batmobile from the movie looks like, so I can't properly judge this model. Maybe the movie version has a terrible looking front fender as well. I do see some curves in one of the pictures, but it's clear how the wheels fit under the fenders.

But since I'm not someone who tends to focus on the negative, I will try to address the positive things. One of them is that the model looks better in real life than in pictures. I have seen this numerous times and it happened again. It has a certain coolness and the overall aesthetics are okay-ish.

Regarding the build itself; At first, I didn't particularly enjoy the build. It wasn't engaging in any way and felt a bit fiddly in times, but at the end I started to like the model (and build) better. Usually I prefer building the chassis over the bodywork, but in this case it might be the opposite. When I was done building, it did get a "well, that wasn't so bad" feeling.

I do wonder how the model looks with bigger tires on the front as well.

I couldn't resist trying. Obviously, this doesn't work out of the box. The front axle needs adjusting. But this is what I call "an artist's impression". The same size in front doesn't look too good. An ideal situation would probably be a wheel size between the small and the big one.

And to wrap it up, the front and rear views, which I think are both quite satisfactory. 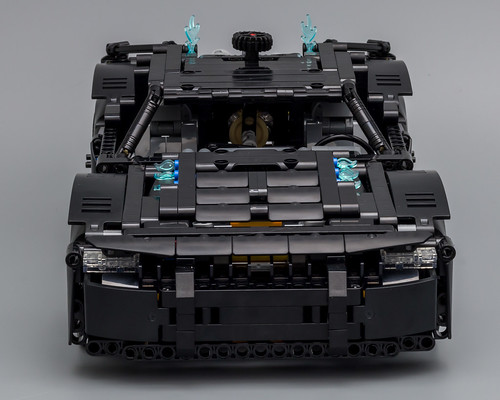 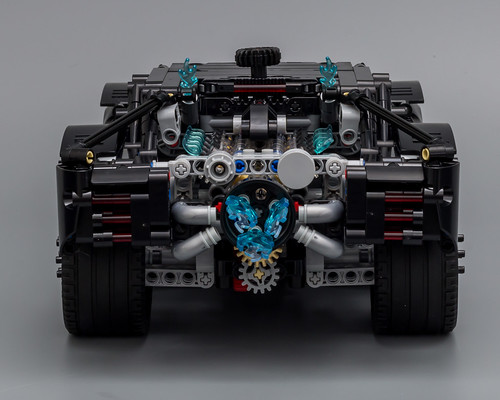 Even though this is just a car, it does pack some unexpected features. The two light bricks provide cool special effects. The one connected to the steering wheel is easy to operate, which is well thought of. The rotating exhaust adds to the coolness of the car.

This model doesn't have suspension, but for me that's not an issue. I know my good friend Balasz from Racing Brick will probably disagree and mention this in his review hehe. In my opinion this still is a genuine Technic model, whether it has suspension or not.

The main question that needs answering is; am I surprised by this set? The short answer is "no, not really". Does this mean I don't like this set? Well, that isn't entirely true either. I would easily skip buying this set, but it's not as bad as I initially thought. During the build there isn't a big revelation that made me love this set, but I can imagine that this set will be popular, like Dom's Charger.

The three added features compensate the lack of suspension

The extra features will probably keep kids entertained for a while.

This model won't break the bank, so it's okay for what you get.

Thanks you for reading this review. All pictures can be found here.